Residents, friends and family celebrated the 200th anniversary of the opening of the Royal Naval Hospital, Great Yarmouth. A traditional naval tug-of-war contest was one of the highlights of the day. The guest of honour, Deputy Mayor Michael Jeal, planted a  sweet chestnut tree grown from seed by gardener's son Michael Crame. 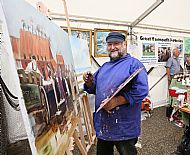 Ernie Childs (left) of nearby Great Yarmouth Potteries  joined in the fun. Ernie had been commissioned by the residents to produce a special limited edition china mug for the occasion.

Balloons were released with a note attached asking the finder to contact the Hospital. Replies were received from across the North Sea in Holland and Germany.