HRH The Prince of Wales

Following its closure as an NHS hospital in 1993, the buildings and grounds lay empty for three years until the architect Mr Kit Martin bought the site and converted the buildings into apartments and houses in collaboration with the specialist conservation architects Purcell Miller Tritton.

The renovation of the Royal Naval Hospital was supported by Prince Charles who visited the site on 23 March 1996 and described the project in his article ‘Too Good To Lose’ in Perspectives magazine in September 1997: 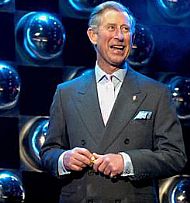 There is a ready supply of users for buildings converted in the right way, evident in a number of successful projects already completed. The Royal Naval Hospital, Great Yarmouth, is a monumental arcaded Georgian square, and was built to house sailors returning from the Napoleonic wars. There was concern on its closure that this historic complex would be lost amid new housing development. Historic Houses Rescue 1 came forward with a proposal just in time. Some two acres of temporary and prefabricated buildings have now been removed, and all the historic buildings are being restored. There is a range of houses and apartments appealing both to the local and national market, and sustained demand shows how excited people are at the prospect of living in a historic building if they are given the opportunity. There is also a chapel which will remain consecrated 2, and the building located under the clock tower will be a small museum with an important collection of Nelson memorabilia 3 so that local people and visitors can enjoy the buildings and learn a little more of Yarmouth's story. 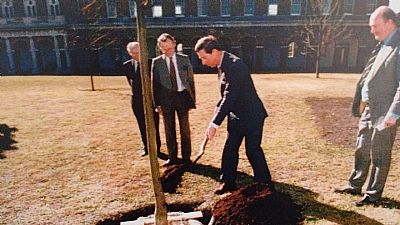 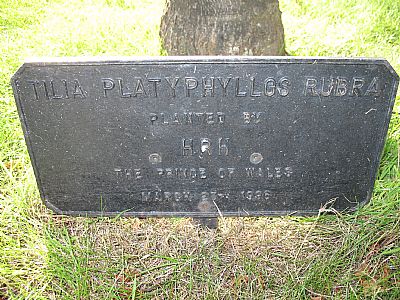 Sign at foot of lime tree planted by Prince Charles