Captain Manby was the barrack master at the Hospital and the inventor of the Manby Mortar, later developed into breeches buoy. Wikipedia provides more information on this fascinating local character:

“The noble pile of buildings in the vicinity of the signal station, are now belonging to the Barrack Department, and constructed by them to contain a limited number of troops to do the garrison duty of the place. It was designed for a Royal Naval Hospital, and fitted up with every attention to the benevolent purpose for which it was erected, being surrounded by a collonade to shelter the convalescents from the inclemency of the weather, and the square being laid out in gravel walks and grass plats, diversify the scene, and by tranquilling the mind, alleviate the tediousness of confinement, and accelerate the recovery of health. It is open to visitors, and may, by application to the officer who has it in charge, have its various arrangements inspected. In the court yard are four excellent family houses for officers belonging to the establishment, which are provided with every requisite appendage for convenience and comfort.” 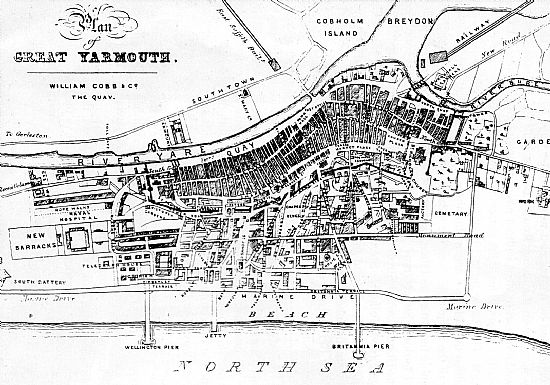 “The Royal Barracks, the most considerable of the modern buildings, stand upon the south denes, at a convenient distance from the town, surrounded by a high wall of great extent. An iron gate opens into the court yard, on each side of which are two good houses for the barrack master, and other officers.

The building is quadrangular, with a detached range of offices for the accommodation of the military, and it is computed will contain eight hundred men. It was built in 1809, from the plan of Mr Pilkington, at an expense of £120,000, and originally intended for a naval hospital, for which it was admirably adapted.

The delightful shelter of the piazza enclosing the area, in which the air may be equally enjoyed as abroad, is highly conducive to the recovery of invalids. It did not, however, long continue as a hospital, for in consequence of St Nicholas’s Gatt, the only safe entrance to the roads, shoaling its water, the passages became contracted and unsafe for men of war and ships of burthen, and, in consequence, an order was sent from the Admiralty, to discontinue it as an hospital, and convert the building into foot barracks, but it is now commonly unoccupied. When in use, it seldom receives more than a detachment of dismounted horse, or a company of foot soldiers. The barrack master and his sergeant are residents, and to the former all military orders are directed.

This building was eminently useful in 1815, when upwards of 600 of the wounded Waterloo heroes were brought here, and comfortably provided for.”

A Pictorial Guide to Great Yarmouth (1854) published by L A Meall, Bookseller, Quay

These buildings were erected in 1809, at an expense of £120,000, by the father of the present S M Peto Esq, MP, from the designs of Mr H Pilkington. They were originally used as a Naval Hospital, but were shortly afterwards converted into an Infantry Barracks capable, it is said, of containing 800 men; and in the year 1815, 600 of the wounded at the Battle of Waterloo were lodged in it. From the period of the termination of the war, it had been almost entirely useless, being occupied at distant intervals, by small detachments of soldiers; but in 1844, in consequence of the Government Military Lunatic Asylum at Rochester being considered unsuitable for the patients, the Officer in charge visited the Barracks here with a view to their being converted into an Asylum; and in the latter end of the year 1846, the necessary alterations being completed, the patients were transferred to the new Military Lunatic Asylum at Yarmouth. 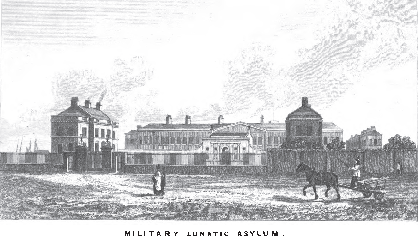 Entering the Asylum by what may be called the north front through an iron gateway, we pass into a magnificent courtyard with residences on either side, for the physician in charge and the assistant physician. Another gate at the end of the yard leads to a range of offices which, together with the main building itself, form a large quadrangle, the hollow centre of which is occupied with tastefully laid out gardens, walks, etc, surrounded by shady and agreeable piazzas. Upon the east side are terraces, constructed for the use of the patients. Under the terrace nearest the south, rest the bones of such brave fellows as have died within the walls, from wounds received upon the battlefield. In the building are Promenade Rooms upward of 105 feet in length.

The number of inmates of this Asylum generally averaged about 90 and the establishment comprised 25 attendants. A Chapel is attached for the regular performance of divine worship. The entire range of buildings comprises an area of about 15 acres. Persons desirous of visiting the Asylum could only do so by an order from the Secretary at War.

Upon the breaking out of the war with Russia in 1854, the Government determined upon restoring the building to its original use, that of a Naval Hospital, for the Baltic Fleet, and the lunatic patients were removed in June of that year."

The Picture of Yarmouth (1819) by John Preston, comptroller of His Majesty's customs at that port

These barracks are situated on the South Denes, about half way from the South Gate, towards Nelson’s Monument, and within less than a furlong of the sea-shore. This magnificent and modern pile of buildings was begun to be erected in the year 1809, the first stone of which was laid by Admiral Douglas. They were originally designed for a Naval Hospital, being first fitted up with every attention to that benevolent purpose; and are surrounded by a colonnade to shelter the convalescents from the weather, and which forms a spacious square, laid out in gravel walks and grass plats, possessing every advantage to alleviate the tediousness of confinement, or to accelerate the recovery of health; but soon after the expiration of the late war, the old barracks having been directed by government to be sold, this noble edifice was partially converted into barracks, and has been constructed by that department to accommodate about one hundred men.

This place is occasionally open to visitors, and may be viewed by proper application to G W Manby Esq barrack-master, whose polite attention is well known here at all times to strangers and others, desirous of inspecting its various arrangements.

In the court yard are four excellent family houses, for officers belonging to the establishment, handsomely constructed with every requisite for convenience, and suitable to the comfort of the inhabitants. 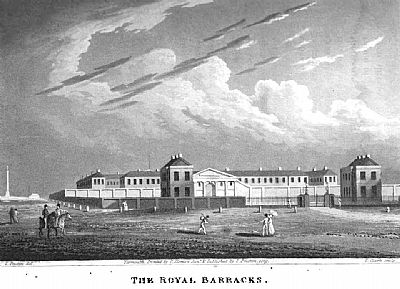 These houses are placed on the north area of the premises, the whole being surrounded with a substantial brick-wall, except the width of the yard to the north, which comprises the grand entrance gate, and is ornamented with handsome iron palisades, fixed upon a stone coping. The noble and massive appearance of the exterior cannot fail to arrest the notice of visitors, particularly when viewed from the high lands of Gorleston, or in approaching from thence towards Yarmouth.

This extensive building was completed in the year 1811, and cost about £120,000, and reflects the highest credit on Henry Pilkington Esq the architect, as well as on Messrs Miles and Peto, the builders.

It has the town on the north, the ocean on the east, Nelson’s monument on the south, the river Yare on the west, and commands a complete view of the race-ground: in short, on a fine day, nothing can exceed the pleasantness of the spot, which has been admirably selected for this useful and noble establishment."