Most of the burial markers are similar to those at Great Yarmouth,  a concrete cross with a metal inscription plate giving name, rank, date of death and age at death. The only other embellishment being the letters ihs representing the first three letters of the Greek Holy Name for Jesus. 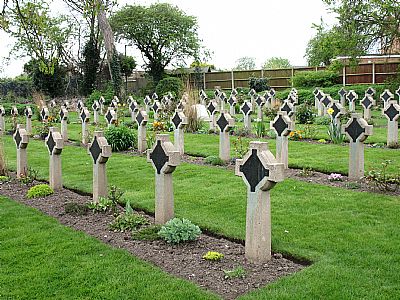 The burial markers at Caister Old Cemetery are mostly set in two nearby plots, but are difficult to catalogue as these plots were not used exclusively for patients from the Hospital. (The burials include casualties from HMS Midge, the WRNS hostel hit by a German bombing raid on Great Yarmouth in 1943, and HMS Pintail, a Royal Navy patrol ship hit by German bombers in the Thames estuary on 31 October 1940.)

A full list of burials of those believed to have been patients of the Hospital is attached. We have indicated in red where it has been possible to confirm a burial to a particular Royal Naval Hospital source document. 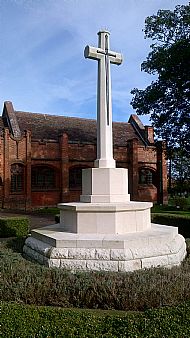 Cross of Sacrifice and Chapel at Caister Old Cemetery

After the end of World War Two, patients were returned to the Hospital. Burials continued to be made at Caister but in the adjoining New Cemetery. The main plot consists of 48 graves, with a second plot of just 5 graves at the opposite end of the Cemetery. The dates of death are from 1951 to 1957 after which the Hospital passed to the National Health Service and was renamed St Nicholas Hospital.

It is likely, but not yet certain, that all burials in these two plots were of Hospital patients.

A listing of the Caister New Cemetery burials is here. Those patients confirmed to the 1939 Register for the Hospital are indicated. 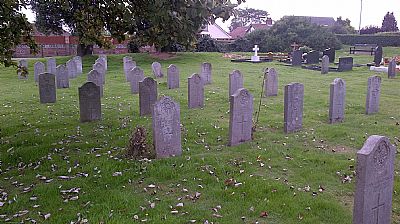 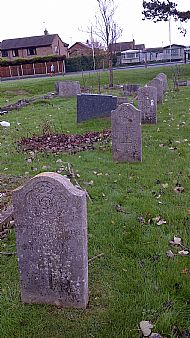 To assist in family history research, photographs of individual burial markers can be e-mailed free of charge on request.

Photos on this page © www.rnhgy.org.uk